Unless you’re one of the few (and lucky) coaches who have been at a school long enough to build a culture where off season work in the weight room is embraced by everyone, chances are really good that you’re among the majority of coaches who are constantly having to talk about the importance and benefits of hard work in the weight room while corralling kids after school before they get on the bus or hit the parking lot. Or perhaps you and your staff are personally providing rides to make sure your players are hitting the weights.

This morning I came across this message from Trinity HS (TX) head coach Chris Jensen, who tweeted the following to his team – aimed specifically at the guys who are skipping workouts. 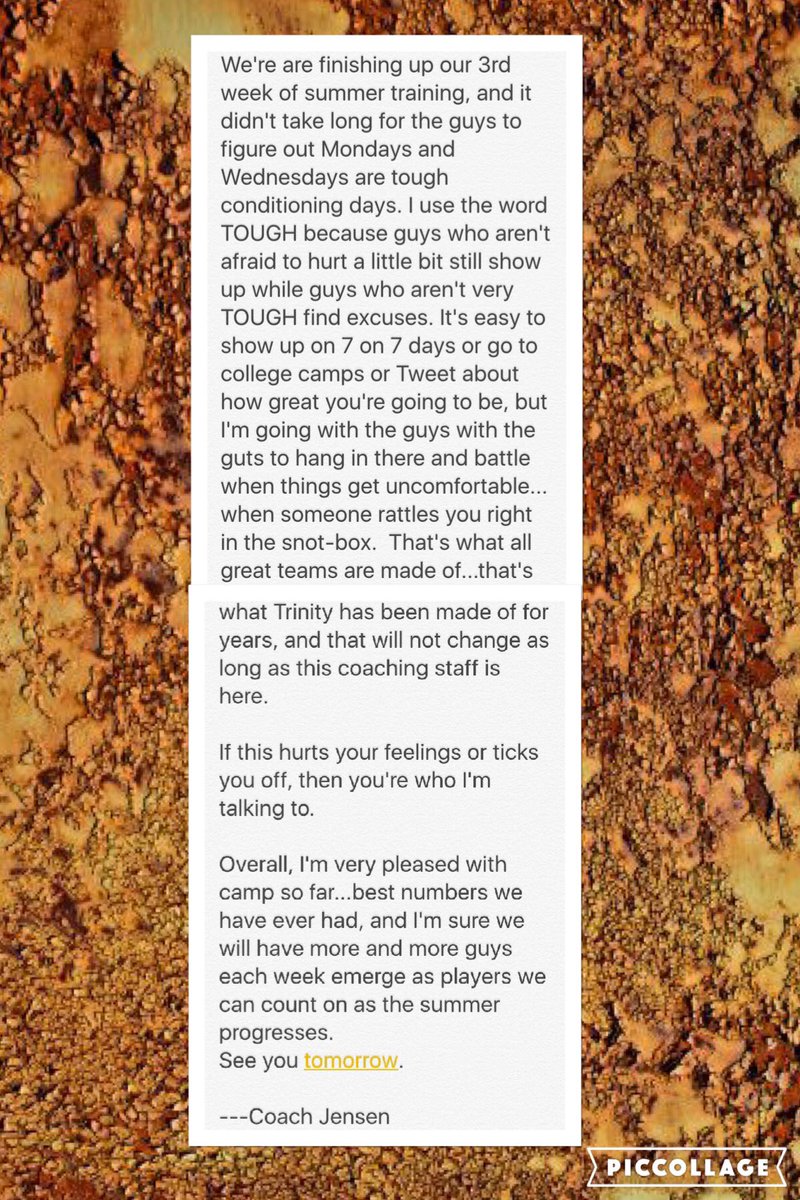 Open letter from Coach Jensen. RT to all the Trinity football players. #TrojanDNA

I think that deserves a standing ovation. He finds a way to relay his expectations of kids in the program sternly, while communicating the expectations of players in the Trinity program. “Want to play for us? Prove that we can trust you in the weight room,” is the overriding tone to me.

At the end of the message, Jensen (who has been with the program for over 16 years) notes that they had the highest numbers ever for their camp, and he’s “sure we will have more and more guys each week emerge as players we can count on as the summer progresses.”

It wasn’t that long ago that Trinity HS stocked their trophy cases with a few Texas High School State Titles (2005, 2007 and 2009), so the coaching staff and community are aware of the work it takes to compete at the highest level. But just because you have a few state titles over the past decade or so doesn’t mean today’s kids (many of whom lack a real sense of history when it comes to football) are beating down the weight room doors to get better.

Just how successful has the program been? Trinity HS points out on their team website that:

Trinity has been ranked # 1 in the nation. Over the last 14 years the Trinity Football record is 165-26. The Trojans have been featured on the front page of the Wall Street Journal; They have appeared in a national Gatorade commercial; Trinity football has been in a John Madden football commercial;

This is proof that even kids at even the most successful programs have the same thoughts, and face the same type of obstacles and temptations as other kids across the country, regardless of the past or present success of the football program.

Coach Jensen’s approach is just one of many ways to approach the issue of players skipping workouts.